The Case-Book Of Mr Sherlock Holmes The PC

For PC Gamer, the first (er) "Series 2" Back Page, ie I went off in between to displease a different Art Ed on another mag. (Confusingly, Toothbrush was written and published after this one, but I posted it first for certain purposes.) Illustration by Bunkerby Bones after S Paget, ie after S Paget had been dead long enough that we could nick his perspective.

The Case-Book of Mr Sherlock Holmes The PC.

-eem myself following the recent débacle of the Giant Mouse of Sumatra, and heedless of the damage to the knees of my trousers, I flung myself down upon the carpet beside the corpse and applied Holmes The PC’s methods. Sir Jabez Swill, a fierce giant of a man with a powerful, bristling beard, lay on his back, his right temple stoved in by the fatal blow of a loaded crop abandoned nearby. His eyes and mouth were open as if in surprise and one hand clawed at his girdle.

“I agree, Holmes The PC. Lady-Sir Frances, where is your husband’s bodyguard?”

“Benson? He left quite suddenly, earlier in the evening.”

“Hm! That may be significant.”

“Quite right, Holmes The PC, there is a deeper connexion here. Lady-Sir Frances -- Mr. Cusp -- time is short, so please limit yourselves to giving the evening’s events and your likely motive for the crime.”

Mrs. Swill, nee Naismith, spoke first. She was a handsome woman of perhaps thirty, the natural cleverness of her Northern poor-town lineage evident in the passable mourning-veil she had fashioned by rubbing a doily in the coal-scuttle. "The vicar, Mr. Cusp, was talking with Jabez while I read some pornography to pass the time before dinner. Benson was at Jabez’s side as usual, a calming influence upon my tiny husband, who is in fear of his life from the so-called Workers’ League For Ethical and Humane Treatment -- their socialist absurdities believe it wrong for a man to embezzle from his own mill, and to beat his own employees to death with a weighted knout as he sees fit. Without warning, Benson raced away through that door to visit an ill sister, or return a library-book, he forgot which. Shortly afterwards, Mr. Cusp realised Jabez was dead. Instantly I had the doors locked to preserve the scene. We survived by sucking at a dish-cloth passed through the transom by Agatha, a left-handed maid of impeccable references. I am the sole beneficiary of Jabez’s will, though his gambling debts are erasingly huge.”

I noted with pleasure her defiant bearing and at least one of her flashing eyes; womanly effects of course wasted upon Holmes The PC. The vicar, a wiry man of cunning aspect, flicked open a small silver box with his thumb to display a reduced photograph of Charlie Peace upon the gallows.

“Snuff?” We declined. Cusp tore a strip from the picture and thrust it up his nose, then sneezed lavishly into my lap. "I am Pelbeblian Cusp, an ex-matelot. It is my 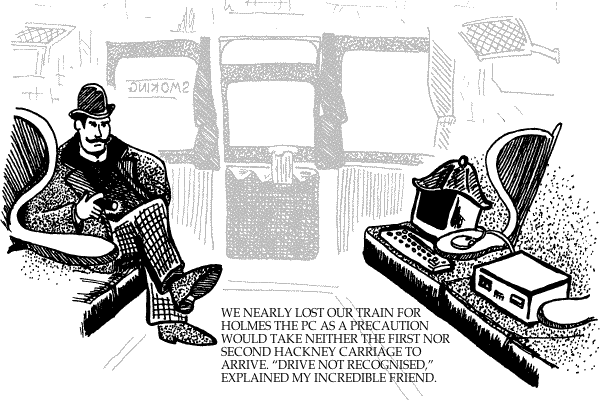 manner to ask contributions of my parishioners towards the upkeep of the deranged, and it was while discussing such a cheque with Jabez that I noticed he had died several minutes ago. I gain no profit by his murder, gentlemen.”

A perplexing mystery! I fell into a brown study. How could even my amazing friend unravel this case? His deliberations seemed never-ending.

“Of course! Brilliant, Holmes The PC! You have outdone yourself.”

IT was eight-and-a-half seconds later and we were still gathered in the opulent sitting-room. By manipulating a tea-trolley, and a length of oily twine supplied by the one-legged Spanish gardener, I was able to make Holmes The PC pass purposefully back and forth before the fireplace as I articulated his reasoning.

“This case presents some points of interest. The evidence of the telegram shows Sir Jabez knew his life to be in peril. It may appear that the Ethical League struck before we could arrive, but the answer is far simpler. Lady-Sir Frances supplied a vital clue in speaking of her ‘tiny husband.’ The victim is not Sir Jabez. It is Benson the bodyguard, bludgeoned to death by Sir Jabez so he could escape creditors and revengers. His fatal mistake was to flee in haste. Holmes The PC has downloaded county blueprints demonstrating he has, in fact, darted into a cupboard.”

There was a muffled wail from behind the door -- “You damned, interfering jackanapes, Holmes The PC! I believe you are the very devil himself!” -- followed by the collapsing of stationery. Within a few moments we had the miniature Sir Jabez trussed safely in custody using Holmes The PC’s extension cable.

“He was relying on that simple, splendid component of the Briton’s nature,” I concluded; “embarrassment. He knew you would not look closely at the body out of embarrassment; and if Benson were recognised later, nobody would say anything for fear of causing a fuss.”

“An elementary one. You see, we believed it was an affair of high ethics; but instead it was one of --”

And we all laughed until Holmes The PC crashed, irrevocably destroying vital evidence in fourteen pending cases.