Maid Marian and Her Merry Men the Musical the Programme

Once upon a time, I went to the The Bristol Old Vic Theatre theatre to see Maid Marian and Her Merry Men the Musical, the musical based on Maid Marian and Her Merry Men (the justifiably fondly remembered television programme, though I could have done without the funny joke of traditionally glowering rugged antihero Guy of Gisbourne being a perpetually shrieking cretin who then appeared in every subsequent ep despite duplicating the narrative function of King John) and, after an evening of catchy melody and boffo yocks, I confidently predicted the hit show by series writer T Robinson and collaborators M Billingham and D Lloyd would tour nationally to packed houses, so obviously it was never heard of again.

Recently, I was rummaging in some boxes trying to find my ability when I came across the programme for the briefly staged romppe, which with typical attention and jokes was by the show writers In The Style Of… a celebrity gossip magazine (called, obv, “Hail!”). A rapid glance around THNTRNTeiee suggested that, remarkably, it had never been archived. As far as I can tell, this important historical artefact has been lost forever. Accordingly, I’ve scanned the neglected promotional booklet and you can download it here. Enjoy. 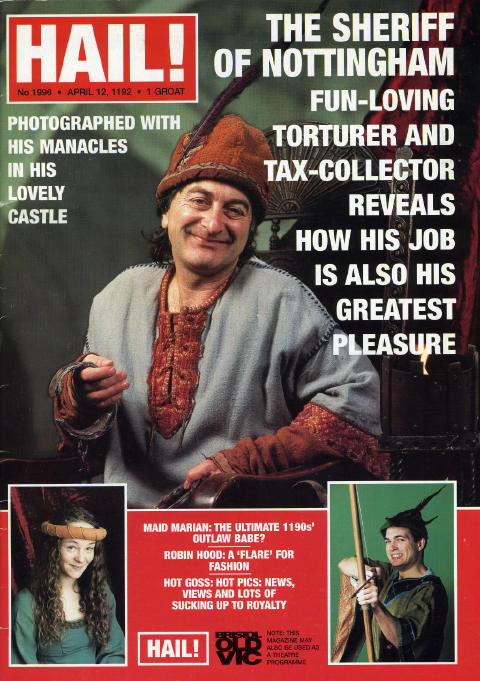 SLIGHT SPOILERS ABOUT SCANS
The scans were a bit blotchy, so I cleaned them up and downsampled the black and white pages, resulting in slightly speckly but much easier to read 16-colour pngs of significantly smaller filesizes. I’ve also thrown in the production questionnaire.

SLIGHT SPOILERS ABOUT MAID MARIAN AND HER MERRY MEN THE MUSICAL
One bit I’ve been bursting to mention for 14 years is the clever cameo in the never revived show by T Robinson. He plays the oily stage manager who opens the evening then leaves the theatre by the centre aisle — a cheeky publicity gimmick. (The part of the Sheriff of Nottingham is played by co-writer M Billingham, who of course was Gary the Guard in the television original.) At the end of act one, when Marian’s peasily unseated the Sheriff, the stage manager surprisingly reappears, rubbishing the events we’ve just seen. Striding back through the audience and leaping on to the stage, T Robinson explains that this is not what really happened and the story will now be told again — he whips the Sheriff’s trademark Van Dyke from M Billingham’s chin and slaps it to his own — and DONE PROPERLY. The audience went crackers.

SLIGHT SPOILERS ABOUT M BILLINGHAM
M Billingham went on to write a series of ingenious thrillers, receiving the ultimate showbiz accolade of having the uniquely macabre plot for his debut book Sleepyhead stolen outright for the pilot of the pantomimically fascistic CSI New York.