CUE TITLES: a rapid series of wildly angled black and white stills of the same weathered gravestone in a slightly unkempt county graveyard, accompanied by the thrilling 60s stabby brass of something by Laurie Johnson from stock disc KPM194 (probably Chase That Car or Fisticuffs). We hold climactically on a straight shot of the corpse lozenge, the photograph inverting to a crack of lightning.

SCENE: the luggage van of a speeding train. Many trunks and props. Set vibrating to suggest sweeping passage of powerful locomotive. The connecting door bursts open and a colourful selection of circus performers races in. A ringmaster’s body is on the floor, pierced with a sword.

AMAZO, THE JUGGLING TRAPEZIST: Good lord! Mr Throaks has somehow been murdered in this locked compartment on our non-stop express to the big top in Bolton.

LORD PUNCHINGS, THE DANDIFIED THUG: How could anyone possibly solve this baffling crime?

INSPECTOR DEAD (appearing by a superimposition process): Not so fast, my friends. I believe I have found a witness.

GHOST OF RINGMASTER THROAKS (pointing to Dudley Mystery, Illusionistidigitator): It was him with a trick.

INSPECTOR DEAD: I wouldn’t say no to a glass of “spirits,” miss. 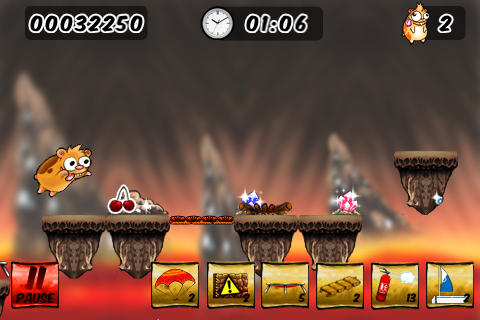 Somewhere inside Crazy Hamster is a decent little Lemmings knock-off, but the trouble is that they haven’t thought it through. (To be fair, while Lems is the easy reach — the hideous iTunes Shop describes the game as A Lemming, which is annoying because I was going to use that joke — it’s barely accurate. You don’t control the ham except to change his speed, and your items affect the landscape rather than his behaviour, and a more accurate comparison would be with something like Sleepwalker. Still, Lems is close enough in that you’re preventing a character from blundering into disaster across a scrolling world by poking icons, so we’ll stick with it.)

An obvious fault is that there’s no capacity for planning; you’re reacting for the entire game. Some of this is deliberate (eg high-speed dabbing as your ham swans into a tunnel lined with a mixture of half a dozen traps) but mostly it’s a mechanical failure on two fronts: you can’t scroll the world to look ahead; and the traps are digital instead of analogue. In Lems, your clicks were free-form (leading inevitably to setting off the builder too soon so the knobbly staircase fell a couple of pixels short), but in Crazy Ham you can only set the exact icon in the exact place, or the game ignores you. 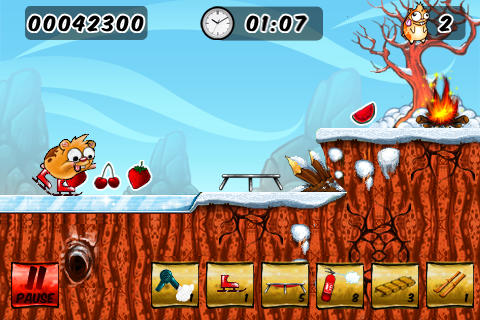 Nothing you do has any wider effect, so in essence you’re playing a series of screen-wide mini-games.

This amplifies the problem of not seeing ahead, because Crazy Ham is a game of consistently absent visual cues. Let’s say you’re nearing a precipice: you can bung in either a parachute, or a trampoline, or a boosted trampoline (for longer jumps), or a ham-reversing block. Frequently you’ll have no idea what’s needed until it’s too late, because the scrolling is waiting for your ham and thus can’t reveal if there’s an adjacent cliff, or a huge drop, or whatever. Your guess might be perfectly logical, or even the only conceivable answer in the situation, but because the game knows that (say) the off-screen gap is too wide and can’t fathom why you’re not setting down the ham-reverser, you’re left feverishly clicking and placing everything in turn until you blindly hit on what the prog expects.

This is demonstrably a level design error, because a few mazes do correctly add a pointedly visible outcrop or a bit of target fruit or something as a clue. More often though, the bad design is reflected in bits like traps immediately after slopes, where the vertical scrolling means that for precious moments you can’t place anything because the icon panel is obscuring the trap. In another bit which fooled me for ages, you have to let your ham run the wrong way until he reaches the designer’s hotspot for a reverser, even though there’s plenty of space beforehand to place the item more efficiently. (There are no wrong routes or red herrings — you’ll always use exactly the number of items you’re given. This makes it doubly odd there’s an end of level stats page which tots up your nabbed fruits, as if at some point there were bonus tangents.) I haven’t seen a game so obviously put together by different clumps of level designers, at least one of whom is a fatal cretin, since GTA San Underpants. 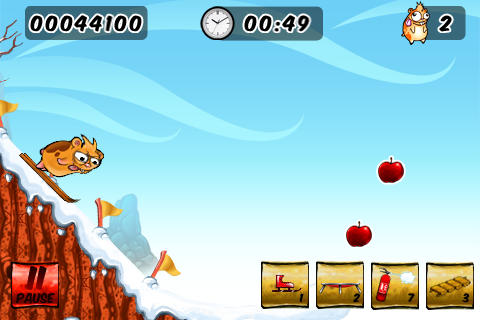 Crazy Ham himself is brilliant. They should call it Brilliant Hamster in Hamfisted Game.

(That’s quite apart from the dangerously uniform graphics: the icons tend to the brown — you can easily lose track in a tight spot of which in the layout is the trampoline and which is the bridge that looks like a trampoline — and for no reason at all extinguished fires leave behind a cluster of logs that closely resemble man-traps. Incidentally, nearly all of the maps deliberately stick those hard-to-see man-traps against dark background graphics. Ha ha, you’ll say when your ham suddenly dies as you’re knocking out deadfalls as far ahead as you can reach. Ho ho, you’ll add, because you have to restart the level. At least there are only two or three with such a tight time limit that you have to speed up your ham, which you do by tilting the Touch and is hopelessly wonky.)

I’ve been trying to like Crazy Ham for a couple of days now; it’s a perkily presented little game that, to be fair, kept me at it until I beat all 20 levels. The thing is that at every turn there’d be another obviously wrong and peasily fixable mechanical calamity. (For example, although there’s room for a purposeless block of story text when you start, the game fails to bother to tell you what the icons do; and as previously mentioned you can only place the exact device the game expects in the exact spot it’s needed, you can’t even try a new one off the bat to see what happens. Award yourself 50 points if you correctly anticipated a big brown box with an exclamation mark on it is the item that turns the ham around. Award yourself 75 if you guessed the reason laying skis at the top of a ski run doesn’t work is because the hotspot is the first set of slalom flags. And so on.) It’s almost as if the design bugs are another layer of traps. 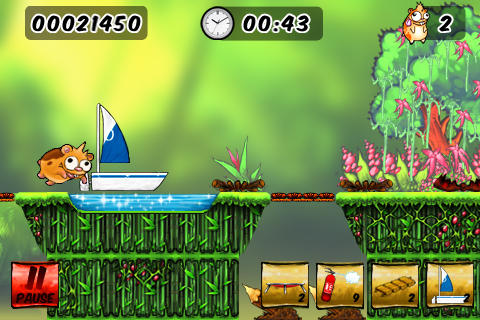 You could probably make quite a good Crazy Ham 2 by letting the player fly around the map ahead of the lumbering ham and bunging items where they liked — you could cunningly design levels with tricky bluffs that consumed two items where an outwittingly crafty single would be the real answer, with multiple routes for higher fruit scores and so on. To be fair, this would be entirely different from Crazy Ham, but most of the work’s already done. (And the last two levels start getting a bit clever, with doubling back and everything.) As it stands, Crazy Ham isn’t a puzzle game, it’s a scrolling linear jigsaw: one piece goes in one place and you have to be right every time to win.

There’s a cheeky bit at the end where you’re invited to pay another 59p for ten more levels (especially as you’re told, “You’ve completed the last free level,” and the extra set is still in Winter Land — the differences between the worlds are purely graphical, but, y’know). So, er, no.