In a bit of a pointy-clicky mood over the weekend, which led to an experiment trying to find something suitable in the hideous iTunes Shop using only the Categories. As you probably guessed this was an unspectacular disaster (“Adventure,” for example, turning out to be a convenient index term for games in which something happens) but I managed nevertheless to collide with a couple. For various reasons, I want to finish All Fridges Are Psychotic before mentioning it, so here’s Inspector Hector, Chapter One: We Negotiate With Terrorists. 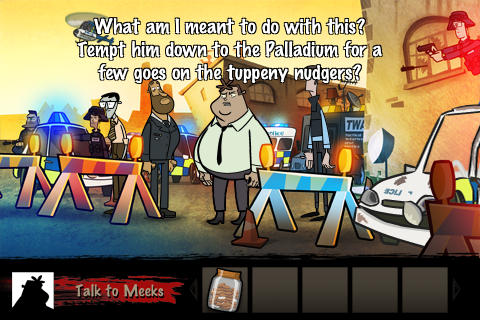 As a nice touch(tm), you can pester minion Constable Lambert for minor clues, if you happen to do that before winning anyway.

Pleasingly backed by the Northern Ireland Arts Council (reminder: we got Shooting Fish), Inspeck Heck is effectively Bribeasy Of The Yard: The Sort-Of Redemption, with your awful copper stumbling hungover through a neatly pointy-clicky-justifying plot where a sniper’s demands involve slightly restoring civic pride in your horrible hometown. The devs are a bunch of moonlighting animators, so it looks terrific and has crackerjack timing, and the script is funny rather than BBC3-y as you might expect from the outline. Long-standing pointy-clicky fans and their arthritis will be pleased to know there are no empty rooms, you can pop instantly between areas and puzzles tend to cluster so you’re not slogging back and forth. 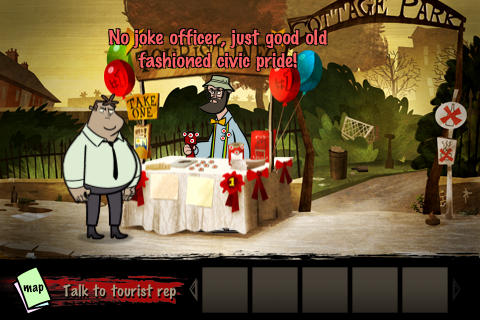 A couple of awkwardnesses have slipped through: you tap to take, use and combine, but drag to examine, which means you end up trying to peer round your own finger to see if you’ve swiped a hotspot; occasionally Heck (harmlessly) jams on his walk cycle when you’re talking; the combo script could have done with another pass (given the attractive level of invention throughout, it’s a tangible disappointment that the game reaches more often than not for the standard “You can’t do that” even when I’m in fact being logically consistent and pretty); there’s an associated minor irk in that the sniper doesn’t acknowledge what you’ve accomplished when you nip back to check, unless you’ve finished the lot (as there’s no explicit “job done” line, I thought for ages that I was missing something extra-sneaky in each scene); a puzzle near the end punchably involves repeating something for no reason that’s previously given only a cosmetic response (in fact, I hit on this by accident); and the bonus URL after the cliffhanger ending doesn’t work, though at least you can phone up and complain because in a flashback to 8-bit future regret the programmers have written their own number into the story. There are comical variations on pointy-clicky standards like the room full of items and the tricky argument. Spelling errors are remarkably few. 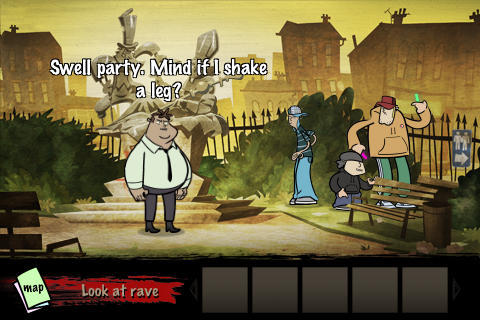 Also, you sinkingly realise that most jokes only work if you have the previous line too. This standalone gag took hours to find FOR YOU.

You’ll gallop through this one in three hours tops, but it’s a lot of fun and the writers’ wrists ping a cracking turn of phrase. Oddly there are no options at all; you can’t, for instance, turn off the (well acted) speech, but can tap to jump lines if you can read faster when someone’s talking in your ear so it all evens out. I keenly anticipate the next ep, Obstruction of Justice, which the programmers disarmingly explain before the beginning won’t happen unless they make pots of cash.