Sorry, forgot this was due, I’ve been playing Flobopop (and I have to look that name up every time. There’s nothing to seize the neurons. Hang on, pronounce the start as “Flow.” Flobopop. Part man, part machine, etc. Never forget that again. But anyway). Readers, I must appear such a fool. (PUTS FINGER TO EAR.) Reader, I must appear such a fool. I realised with a lithe startle yesterday that the Touch has no official Puyo Puyo at all, which is a bit like having a games machine without a terrible Namco emulator.

(There was a Japan-only release, Puyo Fever Touch, but that’s been discontinued. And Columns Deluxe is bundled with Puyo Pop, but it’s a boring port with tiny graphics and huge borders like it’s the Lynx version or something. To find that out I had to buy Columns Deluxe, so must now kill someone.)

Accordingly I cast about for clones by searching the hideous iTunes Shop for “puyo” and at the top of the list was the (free) Flobopop demo. By chance a kindly drunken passer-by had thrown some coins in the tramp’s hat. Before I quite knew what was happening, I’d bought all the clones in sight. You’re ahead of me. They were all rubbish and the free Flobopop demo, which I played last, was P Puyo. 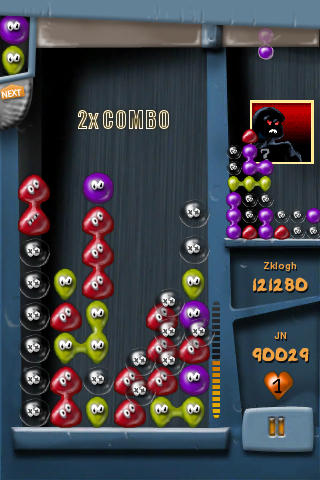 Match-three fans should look away lest the sheer vitality of the game make all their hairs fly off.

(To be fair, they were mostly lying rather than rubbish. Hang on, I’ll save you the bother. Right, there’s Columns Deluxe (alert: contains Columns); Aqua Orb (match-three game); Arrange Mask (match-four game — ie, it looks like P Puyo but you can only connect shapes in a straight line); and Splish Frenzy (the spunky homebrew underdog with its heart in the right place but just too clunky for me). Hang on 2. Where’s Puzzle Orbs? I tried the demo of that a while back but it definitely wasn’t in the search results today. Hm. I’ll have to check that later; there’s a cross-looking group behind me waiting to set up their own intro. YES, ALL RIGHT, I’M NEARLY RELEVANT. YES — THANKS FOR — THANK — YES, HA-HA. Never rent space for an intro, reader, it’s a false economy. And remember to support your local council in outlawing match-three games showing up in searches for “puyo.” And get your hair cut.)

If you’ve had your pretty mind ruined by grotesque lumbering match-three concussive jarring, P Puyo is a nimble contest game where you manoeuvre a pair of coloured blobs to connect to more blobs of the same hue. Connect four in any direction (except diagonally) and they blow up, the rest of the field drops into the space and (hopefully) you’ve set up a cunning chain reaction, at which point your opponent is showered with useless non-matching blobs, fatally crashes out of room and says something like, “Confound you, J Nash, I ought to have known better than to press the bet. Here are the keys to my butler,” and you reply along the lines of, “A valiant attempt, worthy adversary. Let us repair to the Piskies’ Pantry for a special bun while your butler is reglossed to complement the lintel,” and everyone’s shoulder is clapped and you roar away together in a powerful automobile and straight into a five-bar gate and burst into flames but laugh it off later over tea.

It’s a game that’s all high speed and actiony and personable and fun, exactly unlike the match-three grey sterility of yore, and (because you control the blobs as they fall and are shown the next pair to appear) packed with strategy and foreshadowing. I like it lots. And clearly the Flobopop bods do too, because they knock off the game exceedingly well: the mechanics are all here, to the extent of including the all-important, oft-neglected bit where if someone pulls off a combo (which stacks increasingly terrifying numbers of block-blobs) the other player can eliminate the penalty by swiftly replying with their own chain or at least reduce it with an emergency single. (Regrettably but understandably this is a one-player game only, with you versus nine Touch-puppeteered sinister fiends. Incredibly strangely, there’s no option to play on your own until you slip up.) 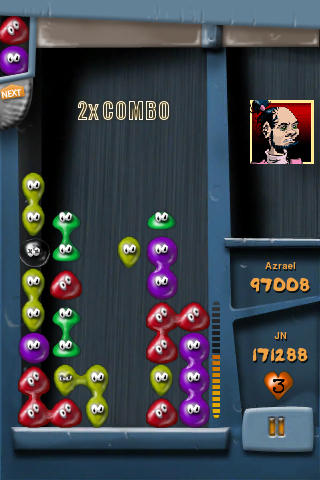 Somehow, my opponent’s board is empty. Let us rectify that with vigour.

Presentation too is spotless, with silly opponents, boingy blobs, vitally unambiguous aural cues (because obv you’ll be concentrating on your own board far too closely to glimpse your rival’s) and a song featuring someone emitting “Puyo!” whenever they feel the need. Even on the proddy handheld your board is splendidly large and clear, thanks to the programmers’ clever insight of shrinking your opponent’s. (Contrast with Puyo Pop, for example, where on top of the huge borders you only ever have half of the screen.) There’s also a neat bit I’ve not seen before where, at the end of the round, a little tug of war shows which player pulled off the most combos. (It looks like there’s room on the screen for a 6x, but I’ve yet to crest 4.)

As you’d expect with this degree of loving rip-offery, the controls are crisp and simple: swiping left and right moves the blobs, a tap rotates and swiping down speeds their descent rather than dropping them instantly. You can prod and push anywhere on the screen you like, but naturally as the board fills up you can sometimes get in the way of yourself — I’d’ve liked some kind of sensitivity pref, because on more than a few occasions I’d swipe down to drop, move my finger to clear my view and rapidly form a brilliant plan after a split-second absorption of the entire board or something, then swipe again to continue, and the game would decide my second poke was a tap. As you’d imagine, on the higher levels a misplaced rotate is lethal. (There are three difficulty levels. Easy nicely passes a journey; Normal puts up a stiff fight; and Hard is, plus it’s faster. One odd thing is that rounds don’t seem to speed up the longer you play without someone winning, but I prefer this because it relies on skill rather than suddenly introducing reflexes. UPDATE. Yes they do. It’s just I kept winning too soon. Cough.)

While we’re on errors, the high-score table doesn’t show the difficulty you played at. Some kind of icon would be a smart idea. Better still, three tables, because there’s only room for 10 scores. (And having a menu option to show the scores would help; you only see them when you lose, or win the entire game.) It’s also a shame you can only share your scores on Face-Book, which I understand to be some kind of thing. And now and again when both boards are wobblingly packed with philosophical blobs there’s a bit of slowdown, but you can switch off the fancy-dan effects if you’re frightened by entertainment. (ANOTHER UPDATE. Following the colossal saga of my six-minute post-review battle against valiant penultimate crim Dr Adam, most of which involved the doc repeatedly and unflappably on the brink of disaster, I can confirm that as both boards approach full on Norm the slowdown mounts significantly. I was eventually victorious with a 5x combo and the final opponent collapsed almost immediately after trapping themselves with an unblossomed ultra-plan, which is not strictly relevant but adds local colour.) 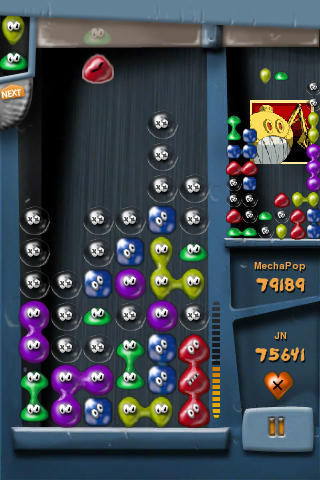 There’s a story behind all this which nobody bothers to explain at any point in the game. Of this I approve.

Flummering trumpery-pickery then (except for the swipe pref). If there were to be an update, or a Flobopop 2 (back to protect the innocents, etc), I’d certainly expect an Endless/Cascade option, and it’d be super-trem to see a two-player mode, but I’m not yet familiar enough with the Touch to know if that’s in fact possible. (It could be I might as well ask for the game to beam holographs at the moon. On a stick.) In the meantime, I’ll leap back in for another round, swirling my bee-stung lips round the Super Foul Egg catchphrases, watching all my plans get wrecked by the bloke who pounds you with inconvenient singles, and generally becoming so involved in the game that when it freezes momentarily for the rival’s board to collapse in defeat, I invariably (a) convulse in my seat thinking it’s crashed, and (b) rue the end of the contest because I was this close to pulling off the BEST COMBO EVARR.