EDDIE: Hello and welcome to Touchin’ Roulette, the exciting mystery match where a plucky contestant chooses a theme then tries to pick six consecutive decent games in that vein without landing on something fatally unendurable. I’m Eddie Waring without any of the catchphrases which makes it a bit of a waste of time using me really but never mind, and joining me in the commentary box is a bee.

A BEE: Thanks, Eddie. And as today’s contestant J Nash limbers up, his mighty thews rippling —

EDDIE: That’s not a mighty thew, a bee, that’s a bit of cork on the lens. Slight technical hitch, readers, bear with us.

A BEE: I think one of the engineers is stepping in now, he’s going to thrash away the bit of cork with a broom handle, ha-ha, typical back-room ingenuity there — and, oh, it turns out it was J Nash’s mighty thew, so as he lies on the ground for a bit we’ll remind the folks at home of the rules.

EDDIE: It’s quite simple, a bee. J Nash searches the hideous iTunes Shop for a word or phrase in the exclusive category of Free Touch Games and has to choose six titles from the full results, which of course are shown just as a game’s name and icon. If he can make it through playing all six games without hitting a rubbish one, nobody needs to get shot. It’s a real test of skill and judgment, also thews.

EDDIE: He’s back on his feet and ready to start. And he’s off! A powerful bound over to the keyboard, a bit of a sit down and he’s typing his search term. I can’t quite make it out from this angle, a bee.

EDDIE: That’s been confirmed by our boffins on the spot — it’s official — today’s Touchin’ Roulette theme is zombs. A bee.

A BEE: Surely confidence bordering on arrogance there.

EDDIE: He’ll do well to get through this, a bee, indeed. And there are the results, and he’s studying the page… calculating the odds based only on the name and promotional lozenge… the suspense is audible…

A BEE: I think that’s a bit of feedback, Eddie. Oh, no, it is suspense, J Nash is emitting a high-pitched electronic whine from some kind of vestigial antennae — and, yes, the engineer’s stepped in again with another precision blow from the broom handle. And there he goes! J Nash has prodded the first game.

EDDIE: And it’s a strong start from the bendy youngster. He’s gone for this simple but highly replayable Game & Watch for the 90s. Drag trajectories from your two static characters in the bottom corners to pepper hundreds of zombies with molotovs as they totter from the top, boosting cash until you can tap for the brief relief of a smart bomb. A purely frantic siege game that’s over if even one zomb gets through, it’s all about crowd combos and the high, high score.

A BEE: That’s right Eddie, with the whole thing neatly wrapped up in a Deep South atmosphere and ukelele soundtrack for no reason other than it’s funny. 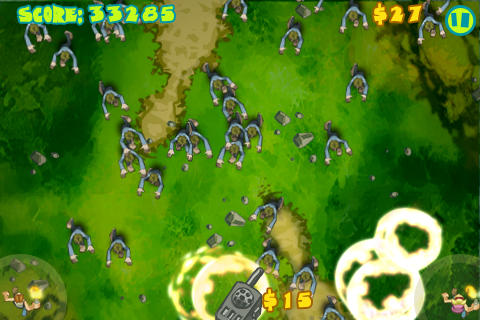 EDDIE: They should have called it Fuelling Bangos.

A BEE: And I see J Nash has hit on a trick to save his thumbs, which is to flip the Touch and flick down with his fingers instead like he’s a miser auditing currency.

EDDIE: Which you’d know all about, ha-ho.

A BEE: Not really, you can’t riffle honey.

EDDIE: And J Nash has lost the game, but he’s clearly enjoyed it, so he’s won a point. The crowd’s cheering, he’s started on a lap of honour, a bit prematurely in my opinion.

A BEE: And he’s fallen over.

EDDIE: What do we know of this one, a bee?

A BEE: Nothing at all, Eddie. It looks like J Nash has guessed it’s some kind of Plants vs Zombies board game.

EDDIE: Ooo, and it’s a bit of a shocker then, a bee, because this is a fast wave actioner where you tap between three static characters and slide to aim. One character’s best at close range, one’s all-purpose but slow and the third arcs a bomb. You can also tilt the Touch to alter the length of your view, as if you’re looking up to the distance or down at the ground, but it doesn’t quite come off as anything but a visual novelty which is probably why you can switch it off and stick with the handiest long shot. 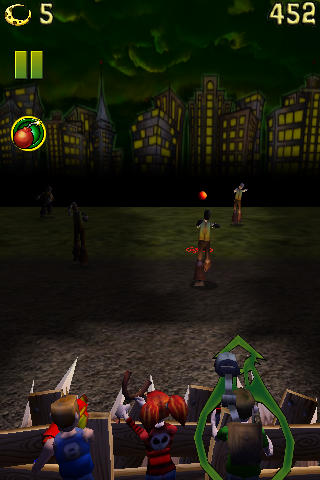 Don’t worry readers, it’s not a school night. (Actually it is, but that’s fine, because everyone else is dead.)

A BEE: I think that might come in more later, Eddie, when you have to peer into shadows with your torch. Now technically this is tower defence, because the zombs batter your bivouac rather than wrecking your wig, and between waves you can repair your untreehouse, upgrade your chums’ kitbags and inflate their ferocity so they’re more likely to blast away when you’re not directly aiming them. And we know J Nash is undecided on tower defence. Could it all be over already?

EDDIE: No, a bee, happily it isn’t. Look at J Nash’s precious squeezy face there — he’s exhibiting clear indications of fun, scampering those gunsights all over the screen and switching fluidly between defenders as each scuff-up requires. It looks like the bomb-lobbing target is a bit wonky, tending to slip slightly as you fire, but this isn’t a calamity because it’s an area burst banger. I’d say it’s a thumbs-up for Kids vs Zombies.

A BEE: And in fact J Nash has put his thumb up, and he’s lost the game. And dropped the Touch.

EDDIE: And he’s fallen over.

A BEE: It’s another poke at the board now, Eddie, and no hesitation there at all. I think he liked the picture of the zomb darting their head into close-up.

A BEE: And that’s paid off, because this is a properly 3D shooting gallery where, inexplicably, you stand still in the most exposed places you can find and have to spin on the spot to pick off the zombs staggering at you. 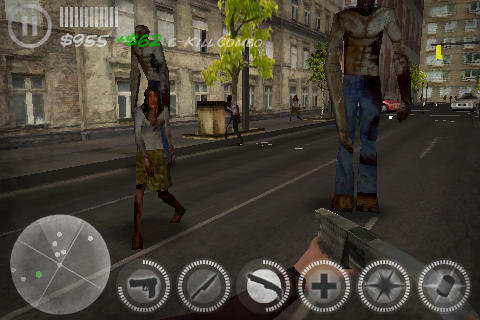 EDDIE: Perhaps explicably, a bee, as the various cash-boosting survivors who run around the cunningly designed levels flailing and squealing tend to get mistaken for zombs and shot, ruining your credit in the shop when you’re trying to negotiate one of the double-dozen upgrades.

A BEE: A fair point, Eddie. This isn’t trying to be a full-bore FPS — But On The Touch and, having tried a couple of those clumsy misfits, I’d say that’s shrewd streamlining. This is a bruising noose of a game where you try to keep an eye on all sides at once for the variably closing zombs, with many super ideas like the way you can swap guns while one’s reloading rather than being left defenceless, promoting forethought.

EDDIE: Unless you’ve popped off everything more or less at once, of course, so have to rely on your trusty pointy knife for agonising seconds.

A BEE: But that’d be your fault for not paying attention, Eddie. The pacy action’s matched by the accurate swipe-and-tap controls and neat shortcuts like tapping the direction arrow of an unseen attack whipping you round to face that way, and the clever variety of zombs mixes up the barneying so you’re always on the verge of fluttery panic.

EDDIE: Then they throw in a couple of King Zombs knocking down walls and shaking the screen aim throw-offingly and the lights get smashed and your radar blinks out so you rummage for a flare and there’s a mob rush in a baleful red.

A BEE: Tremendous looks, zippy shooting and a menacing air of suspense. And the game too, ha ha!

EDDIE: That doesn’t make sense, a bee, but it’s another point for J Nash.

A BEE: This is a wild card choice, Eddie — a risky gamble.

A BEE: Not really, and I think that was more Stuart Hall’s line. Anyway, what’s easier to get badly wrong than pinball? J Nash must surely be thinking of all those Amiga titles that completely wasted his time. Throw in the peasily misused zomb gimmick and it could spell the end for this gallant athlete in the knotted string vest and dangerous nylon shorts. Perhaps he’s too rugged to care — just look at that lantern jaw.

EDDIE: No, that’s a jaw lantern, something horrible he bought in a shop.

A BEE: Well, anyway, he’s jabbed the icon. There’s no turning back now. He’s giving the crowd a defiant sneer.

EDDIE: Great cars, them Defiant Sneers. And, my word, this is a turn-up — the game is just tremendous. Instead of the lumpy pinball table cursorily decorated in a zomb style that we’d imagined, it’s a combination pinball game and shooter where you have to break off from scoring points to run over the tiny escaped zombs before they make it to the graveyard gate that’s posing as the table drain. 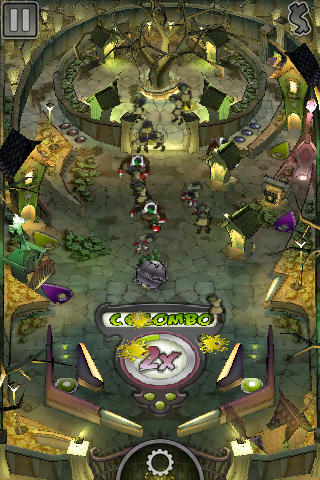 “Thank heavens for the exemplary municipal paving here in Slopetown.”

A BEE: It’s arcade-y pinball in a way mechanical pinball couldn’t duplicate, which mystifyingly is something videogame pinball tends not to try. Not only do you have the miniature zombs waddling around as sinister mobile targets, but all the Touch nonsense is satisfyingly thrown in: you tap to ping the flippers, obv, but also shake to stun the zombs, rapidly swipe in a circle to blow up monsters who make it to the gate and, brilliantly, tilt in the non-pinball sense to guide the huge spiky maceless power-up ball through its splintering rampage. Staple on an upgrade shop and you can certainly say there’s a lot of love and plenty of ideas in this breezy crossover, Eddie.

EDDIE: The Arkanoid of pinball, if you will.

A BEE: Yes, but with the ball effortlessly rolling through the beasties instead of awkwardly ricocheting off them. And good.

EDDIE: Ecky thump, or something.

EDDIE: We were expecting an ’owzat, but that’s a punter’s plunge that’s romped home.

A BEE: I thought you were rugby.

EDDIE: Well, sports, they’re all the same. Clearly J Nash is on a roll here. Only two more games and we can all go home.

A BEE: His reverse logic has swept the board. Just when you think he’s chosen badly, he pulls it out of the fire. What could possibly go wrong for the muscularly kneed competitor? 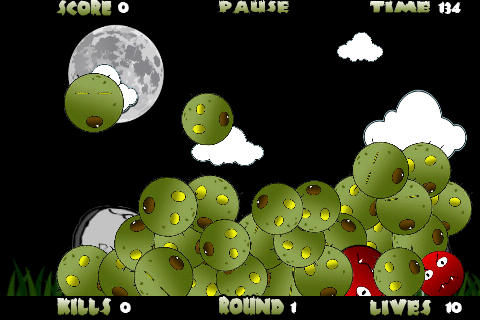 EDDIE: That about wraps up another family fun episode of Touchin’ Roulette. What’s today’s contestant’s final score, a bee?

EDDIE: And if he had to buy just one of the games based on the demos?

A BEE: That’d be Undead Attack Pinball, Eddie. Not only a terrific sample table but a shake-up of videogame pinball we can expect to be widely ignored by idiots, handing it victory over NY Zombies — which, by chance, is currently free, so everybody wins.

EDDIE: We’ll see you next time on Touchin’ Roulette!

A BEE: Probably not, unless you have a hoover and some glue.

There have been 2 comments on this item so far