I’ve never liked these match-three games because they’re so rigid and random; unlike the fun, jostly fluidity of the Puyo Puyo approach where you’re strictly in control, know which pieces are coming next and can plan miles ahead while clearing yourself breathing space in an emergency, in match-three games you’re always slogging away in the present. Connecting three, or a line, or a huge chunk of screen is no reward because another pile of random blocks crashes down to exactly fill the space and your tactics reset. It’s a genre I always feel the host machine would be happier playing by itself, slightly resenting the bothersome human getting in the way quite slowly.

Puzzle Quest, a match-three game lavishly disguised as an action RPG, adds the exciting twist of terrible controls. By chance it was one of the first Touch games I tried, and I’m still acclimatising to the fact these things can be shoddily written (probably because the Touch looks to me like a console, where games tend at least to function), so naturally I blamed all the crazy interface problems on the hardware. (Obviously it couldn’t be my fault because I have the pretty fingers of a strangling pianist, specially imported in a handsome valise.) 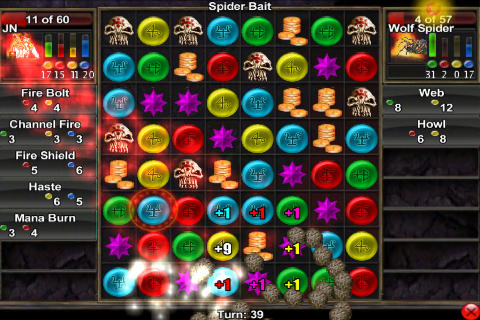 As you know, match-three games involve swapping adjacent gems, and the hotspots in P Quest are so tiny and erratic that you will repeatedly select the wrong one. The only way to reset that — despite plenty of unused screen where, say, a Cancel button could fit — is to click the same gem again. You see where this is going. As a thrilling bonus, if you try to swap gems that won’t result in a match-three then P Quest doesn’t buzz or swap the gems back or something, but peremptorily swats you with a lightning bolt and docks you 2HP. As the idea is to whittle your opponent’s health with certain moves and attacks, you really can be killed off in this static, timerless board game by nothing more than the high-handed controls. (Maybe it’s part of the mediaeval setting, like you’re being expensively booted by a nasally elevated margrave.)

This meant that whatever match-three contest of foresight (ie luck) and strategy (ie luck) the P Quest designers intended, my go was reduced to a nervous peck of the board then, when the game insisted I’d pressed a different jewel, galloping to the gem in the opposite corner of the screen to be completely sure I’d escape a singeing penalty. Even then, P Quest would bafflingly decide that indicating squares yards apart counted as an attempt to swap, or pop up some play-obscuring character stats or spell info because I’d tapped quite close to the side of the board.

All this is if you can even reach a monster: P Quest decorates your destination on the map with a sparkly blob which, astoundingly, counts as an object or something. The very first mission involved the suspenseful mini-game of my bobbing away at an impenetrable cloud of visual effects for over a minute trying to get the game to recognise I was clicking the castle behind it. What’s best is that clicking the map where there’s no door auto-scrolls to that point, so the entire spluttering bellowing quasi-adventure was staged over an illustration of a parchment vibrating queasily between two tinily separated points. 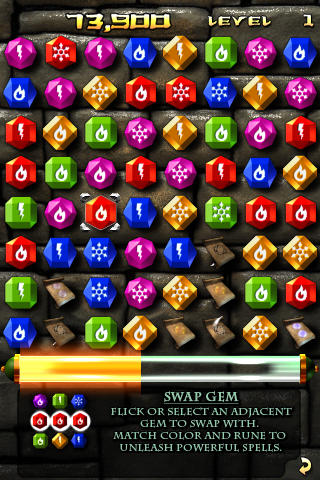 Power Gems. The scrolls are power-ups you can pretend make a difference.

Resultingly, I nearly gave up on the Touch altogether. Then I tried Power Gems, and it turns out the Touch is fine and P Quest‘s programmers are idiots. Same game, but this time with invisibly precise controls: you don’t even have to think about it, just prod and that’s what you chose. (In the interests of fairness I jabbed the board sloppily with finger then thumb trying to make it go wrong but every selection was mine.) Hurrah! Then I threw it in the bin, because P Gems introduces a doubled hampering of the match-three idea: you’re meant to connect not only colours but etched symbols — bewilderingly, because a simple colour match is judged progress-reversingly unimpressive by the victory-determining gauge, you can lose by performing quite well. Well, chums, when a game deigns to agree you’ve finished a level only by pulling off a series of increasingly elaborate combos that, as we’ve determined, are effectively distributed at random, I clap on a hat and hail a taxi. There’s also a time attack mode and GET OUT.

I did not persevere with P Quest beyond the fifth or sixth contest, which is barely out of the tutorial. You can mix things up by casting spells and so on (and in fact this seems the key to success; the match-three bit is chiefly to boost your magic bars), but the horrible controls sink the game with an unambiguous gurgle. In a fitting postscript, after throwing up my hands and going “AAARGHH” I couldn’t get P Quest to acknowledge I was feverishly prodding Quit.

Anyone know of any decent Puyo Puyo clones? I’ve had a quick go of a few purporting to be so, but gave up after the 918th blatantly lying match-three game. Puzzle Orbs was unfrilly but promising, but I managed to play the demo for fifty million thousand hundred years straight despite the occasional I-slid-no-you-tapped rotation hiccup without any danger or spark apart from a healthy glow about my pretty temples as all my crafty ruses sprang instinctively back to life and I remembered I’m better at Super Foul Egg than you are. (Game ability may depend on existence of online-playable version, at which point I will be tragically indisposed.)