NB: Ryndyr doesn’t like Tiny view. Use Norm or Narrow instead.

For PC Gamer, Series 1. One of my favourite things ever. Fantastically, someone wrote in saying they’d played the game with a chum and it worked. They’re probably kicking themselves now for ruining a valuable copy of the magazine that today could be worth nearly pounds. 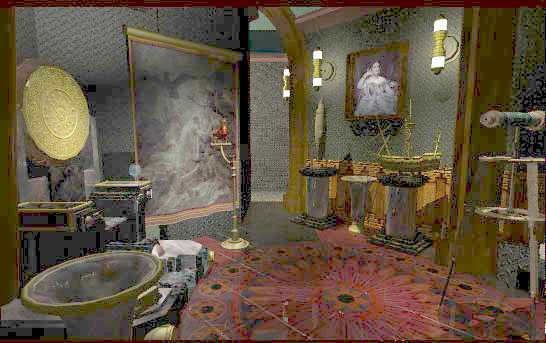 Welcome to the world of Ryndyr!

Obviously, the instructions refer to the original, paper version, which had the pic printed upside-down above the PageEngine(tm) text so you could cut out the whole and fold it. For this exclusive, authentically primitive RyndyrONlinE edition, have the Adventurer click on an object in the picture, then the RyndyrMaster(tm) read out any text (secret RyndyrMaster(tm)-only instructions are in italics) while the Adventurer wears a special blinding helmet, or something.This is the official GamePage(tm) version of the popular fully rendered 3D point-and-click adventure. Cut out the GamePage and fold it in half, so it looks like a Christmas card and both the scene from Ryndyr and the PageEngine(tm) are visible.

HOW TO PLAY
You will need: two players; a pen or knife; a watch. One player is the Adventurer, the other is the RyndyrMastyr(tm). Arrange the GamePage between you so that the game scene faces the Adventurer. The Adventurer now moves the pen or knife to “point” as they would a mouse in the real game, stabbing through the page to simulate a “click.” The RyndyrMaster refers to the PageEngine to see if the click has activated anything of interest. The object of the game is to escape from Ryndyr with the most points!

PLAYING AGAIN
After you have finished playing, carefully fold the stab holes back together, and use the watch to hypnotise each other to forget what you’ve seen. As the Dyngyyn Kyypyr of Ryndyr himself might say, “Gyyd lyck!”