I played Fahrenheit on the X-Box, but conveniently there was a PC version too so I could hurtle this B Page at PC Gamer. Hurrah! (The same thing happened with Thief 3.) Written and printed as A Cup of Tea and a Slice of Menace: Fahrenheit the Lost Scene -- it was only 15.3 seconds later that I realised Fahrenheit Lost was the correct title. Ach weel.

Lucas’s eyes opened with slow suspense. He was a man, in his bed. The doorbell was ringing with sinister urgency. Lucas rose and operated his computer, then opened his cupboard. Should he check his book?

No. He veered across his bedroom and closed the window, then opened and closed it again. At last he opened it and found the door of his flat, outside the door of his bedroom. He looked through the spyhole. It was Tiffany, yes, as the split-screen indicated. He opened the door after some slight shuffling. The crows were absent.

“Tiffany, you make me happy. Come in.” Tiffany came in. She made him happy. An awkward moment as she caromed off the pilaster before finding a seat. “Do you want something to drink?”

Lucas rubbed at his manly chin. It behooved him to respond. A cuppa. Hmmm. Tea? Of course -- tea. “Did you see that film with Tea Leoni? She’s less like Tia Carrere and Mr T than I supposed.”

“Er, nothing.” Blast. No. Clearly she wanted him to bring something. Bring. Yes, that was it -- bring. “Bring bring! Bring bring!”

“Sorry, was that the telephone?”

“Um, I’ll let the machine get it. Listen, there it goes.” He coughed lavishly and blew mumbles up his sleeve in ventriloquial corroboration. How he hated her. His eyes narrowed in furious rage. How he wanted to kill (kill! Kill!). Yes, definitely; kill. “I too would kill for a brew.” Oh well. He paused.

Tiffany broke in. “Perhaps there’s some tea somewhere in the flat.”

Tiffany. How he loved her. He’d always loved her. Look at her, sitting there and swivelling her head to watch him in a way he knew he loved as he banged around the furniture and ornaments. Why had she left him? Why? Why? He dropped to his knees and closely inspected the plant pot for some tea. Nothing. Angrily he glanced up into the rafters. Wait! The kitchen! He swerved into the kitchen. He opened a cupboard. He looked in the cupboard. He closed the cupboard. Perhaps there was something about tea on the television. There was nothing but weather.

“That’s probably because it’s night time in January. In New York. And your 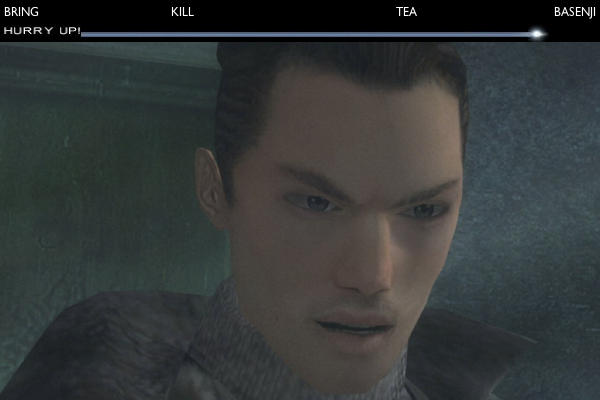 huge uncarpeted flat has no heating and all the windows are open.”

He discovered the tea in a cabinet which he had opened. He picked up the kettle and the tea and made the tea with some cups. He span on the spot and gave a cup of the tea he had made to Tiffany, his Tiffany who had left but returned.

“Play me your guitar, Lucas,” she said. “Play because I’m sat on the floor.”

His eyes narrowed in hampering sorrow. “I can’t. You know I’m colour-blind. The amp is not on!” he shouted, agressively.

“Oughtn’t that be ’aggressively’?”

“You left me! Let me lead my life!” he exploded, crosly.

They kissed. “Take me to bed,” she said. He opened the door. It was the bathroom. Later, in bed, he had a nightmare. Or was it a vision? A man, wispily bald, Cromwellian warted, dancing suggestively with a pretend nudeish woman, perfect and quiescent and happy. Did all the collidingly multiplying conspiracies converge to this one single point? Was this really what it was all about? That was a bit eerie. Lucas awoke.

MEANWHILE, in another large flat, Tyler looked in a mirror. The telephone rang. Alertly he deflected off an ottoman and answered. “Hello? Yes? What? Right!” He put down the telephone. “That was Carla, a police inspector, my boss. She possesses vital evidence in the murder case. The murderer is known to her now. If we act straight away we can catch him immediately, or once more he will escape again. I shall dress.”

Samantha flung herself upon a barstool. “You’re insensitive!” she wept. “I must sell shoes. Now give me sex.”

Tyler crouched and opened the cupboard. Where did she keep the sex?

Outside, snow fell down...